St Mary's was bombed on 10th December 1940. The north aisle of the church was temporarily made secure against the elements, the spaces between the pillars were boarded over, and a coke boiler was installed. This limited space was used from Easter 1941. However the Warwick cinema had to be used for large services. Restoration was not completed until 1949. The vicar published a booklet in 1948, which is reproduced below, along with full-size copies of some photographs. Note that St. Mary's has never had its planned tower built, and as a result is not as dominant a presence on the Acocks Green skyline as it should be. The Church House had its roof badly damaged by a bomb as well. It had been commandeered at the outbreak of war, but St Mary's was able to take it back after it had been rendered unusable! Money was raised to repair the roof, and as a result Sunday School was held there again from the autumn of 1941.

The bombing and rebuilding of St. Mary's Acocks Green, 1948

REMINISCENCES
I want to express my heart's thanks to all of you who have stood by me during this time. Your love and devotion have been a grand comfort to me, and more than compensated me for the other disappointments.

I am glad that I have stayed with you during this time of trial. I should have felt a coward if I had accepted any of the offers which have come to me.

I wonder if ever we shall see a complete church. The ground plan is a Cross. We need the transepts for the arms of the Cross. Until they are built we shall not realise the beauty of our church. What a magnificent memorial it would be! Then indeed our church would be the most beautiful modern church in the city.

Some years ago, before Hitler's regime of terror, a lover of St. Mary's was anxious to build the tower. He most generously contributed a definite sum each year. After the disaster he graciously allowed the money already donated to be placed in the Restoration Fund. I am still hoping that it will not be necessary to touch it, so that when the time comes that restrictions are removed we shall have a nucleus and an incentive.

When the tower is built, I have been promised a peal of bells. What a wonderful day that will be, when we hear them ring out their invitation "Come and Worship."

Will you buy another of these souvenirs and send to your friends abroad? It may be that your copy may be the means of great benefit to the Church.

THE EVENING OF DEC. 10th 1940
As I write, the rebuilding is being done, and it is with great relief that I see a start has been made. A great deal still remains, of course, and a further large sum of money will be necessary for us to complete our task. It will take many years to restore our beloved church, and it is with these hopes ever in my mind that I put on record a few thoughts on the disaster of December 10th, 1940, and a few observations on the rebuilding.

The bomb crashed through the roof at 8.20 p.m., and exploded just in front of the lectern. A large hole in the floor showed the impact. How truly they built our church in the past is shown by the fact that not one of the arches eight years afterwards was an eighth of an inch out of alignment.

A confirmation class had just been dismissed to a safe shelter - the bomb crater was the exact spot on which I had been standing when taking the class.

The roof was blown off and a considerable sum was spent in making the roof trees safe, until such times as rebuilding could begin.

The pulpit of Caen Stone was utterly ruined.

The brass lectern was demolished.

The Walker Screen smashed to matchwood.

All the stained glass windows utterly destroyed with the exception of the East Window. One small square was stolen the day after the bombing. Otherwise, this lovely window is complete.

The new pulpit designed by Messrs. P. Chatwin will be a memorial to Alderman Bailey Cox, presented by his widow.

A man who gave himself in devoted service to his constituents. He loved the people of Acocks Green, and is buried in the churchyard, where he would have loved to be.

Miss May Walker donated £50 to buy a new lectern Bible and left a legacy of nearly £2,000 towards the rebuilding of the Church.

The Women's Thursday Class are giving a new Silver Cross for the High Altar.

The old font was damaged and its exposure to storm and stress for eight years finished its destruction. The new font will be the gift of the Children of the Sunday School, who have already subscribed nearly sufficient to cover the cost.

The organ was badly damaged. The pipes were blown all over the church. Eventually it was decided to dismantle the organ and store it in the Memorial Hall, Summer Road. The separate parts have been viewed by organ builders and classified as "scrap." Their advice is to build a completely new organ if we are to have a satisfactory instrument.

The sound box of the old organ was smothered in the small chamber and the effect lost. It is decided to build the organ on the West Wall. The sound will be behind the congregation and a great assistance to the congregational singing. The consols and a small choir organ will be in the chancel.

Formerly the pitch of the roof was so steep that after a gale many slates were stripped off the roof. Few men would tackle the difficult task of reslating on such a steep incline. Each year it was an expensive item in our expenditure.

The pitch of the roof has been altered and tiles substituted for slates. The tiles look much better and add to the beauty of the church.

To do this, the North and South Walls of the nave have been raised, giving us a much needed improvement in larger clerestory windows.

In the old church the nave was very dark. On the brightest days it was necessary to have artificial light. All the windows were of dark stained glass. The small clerestory windows were also of stained glass. What we shall gain in better lighting, we shall lose in mystery.

As one entered the church, one's first thought was that here indeed was a "dim religious light." Then as one reached the centre aisle and looked East, one gasped at the beauty of the East end, which was always bathed in glorious light.

I never tired of this effect. I hope that our improvements will not destroy the beauty of the church.

On a Sunday evening as I stood at the Altar and turned to give the Blessing, the setting sun illuminated the West Window, a beautiful design by Hardman. It was altogether lovely, and made my heart glad.

These are pictures stamped on my memory, pictures which I have cherished for eight bitter years, pictures which have comforted me in the dinginess of our present place of worship. My heart has been very heavy sometimes when I thought of the House of God which we all loved, and of which we were justly proud.

Many parishioners and 1overs of St. Mary's have given generously - some, I know, at great sacrifice. Rebuilding has been more difficult in these post-war years. We cannot please ourselves - we are the victims of our conditions. Costs mount and figures that we used to regard as fabulous now sound quite familiar. Already we have raised what would have built a church fifty years ago. Today the cost is quadrupled. The building Committee do not want to have anything to do with shoddy or ugly work. We do not want our grandchildren to condemn us for what we have done. Many of you have been holding back until the need is urgent. THE NEED IS NOW.

We cannot decide our course of action because we do not know what money is available. The organ is a case in point. We want only the best - for only the best is worthy of God and those who built St. Mary's did not stint. Think of the lovely carvings which we cannot possibly reproduce.

We believe that it is to the Glory of God and nothing better can restore the lost years and all that those years stand for in our island story and give back to our children those ideals which made our country - nothing better than a Parish Church of Acocks Green even grander and nobler than the St. Mary's which we all loved.

NOW IS THE TIME TO HELP. WE NEED THE MONEY NOW.

Prove to the world by your generosity that you value what our Church stands for - and are prepared at great personal sacrifice to assist in this sacred task.

PAROCHIAL DATA.
Additions and improvements to St. Mary's since 1931.

Bazaar to clear the debt on the organ.

Organ case and seat in memory of Mr. Elmore.

Baptistery screen and marble flooring in memory of Dr. Bradford.

Oak screen in arch in N. Aisle - presented by Miss May Walker, Olton, in memory of her father and mother.

Derivation of the Names " Acock's Green" and " Tyseley"

The place-name of Acock's Green was presumably derived from a former landowner in the parish. A certain Richard Acock of Yardley, is mentioned in an Indenture of Marriage Settlement, dated A.D. 1604 (30, April 2,James I); and in the Yardley Parish Register is also recorded the birth and baptism of Alice, daughter of Will Acock, Gent, in the year 1697.

There are two Moated Houses in the district - Hyron Hall, an ancient estate, but untraceable under its present name, and Tyseley Farm, called " Tisseleye " in an Indenture dated 1327, i.e., Tisa's lea or ley (A.S., a pasture).

Please click on the images to enlarge them. If they are still displayed at a small size, wait for a button to appear in the bottom right corner of the images, and click that. 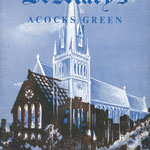 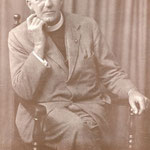 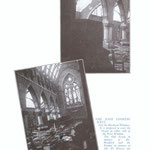 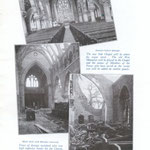 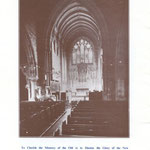 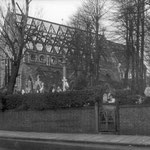 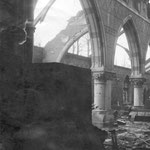 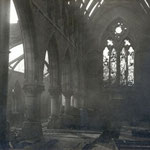 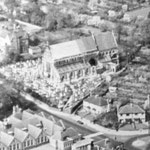 Another leaflet has come to light from this period. Thanks to Peter White for allowing us to place it here. 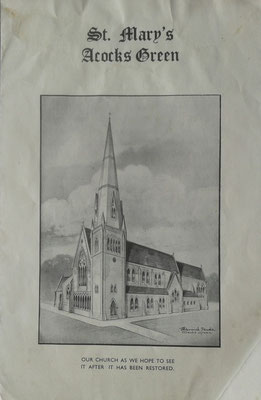 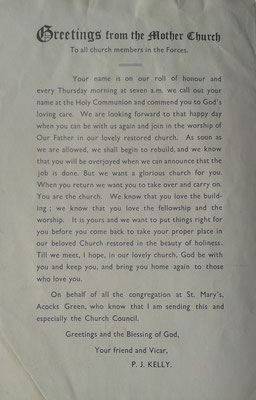 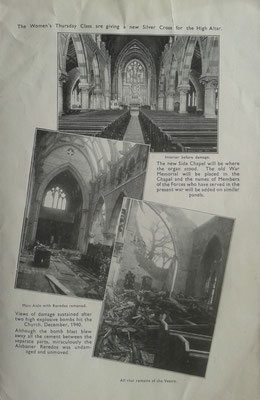 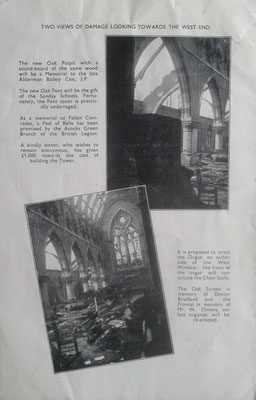 The Earl of Egmont and Acocks Green

Creation of the District, 1867