John and Peggy Rixton and their son Mark, who are descended from Henry and Mabel Rose, have kindly made available photographs and information to help us put together the story of this period in the school's history. We are very grateful to them for their help.

Henry Rose and his wife Mabel presided over thirty years of school life, during which time there was a new Education Act, Acocks Green left Yardley Rural District Council for Worcestershire County Council and then eight years later became part of Birmingham, and a World War cast its shadow over the country.

Other schools opened nearby, like Holy Souls R.C. and Tyseley Council School in September 1907, and Acocks Green Council School at the Green a year later. St Mary's lost pupils on every occasion. Despite this the population was clearly rising very fast, as the school soon recovered its numbers. There was criticism of the state of the buildings from 1903 onwards by inspectors, with threats that funding would be withdrawn unless improvements were made.

The late Albert Mitchell related his memories of the school to our society.

The Headmaster used to look around to see if there were jobs children could do before school. I had jobs for two weeks while Sarah, housekeeper to Miss Taylor (of the Corinthians, Warwick Road) was on holiday. I had to be there by 8am to clean shoes, cutlery etc., finish at 8.45am, and go straight on to school. For this I earned 6d/morning. One job I did not like was sharpening the knives by using bathbrick spread on a board onto which you rubbed the blade of the knives. I really hated doing that. Some boys used to help the milkmen before school.

People living in the Flint Green and Sherbourne Road area would send a note to the school saying that if the Head would send two of the boys round with a barrow they could have all the windfall apples - these would then be shared out (but before arriving back at school with them the lads would hide a few here and there in the hedgerows along the lane for later collection!)

Every July, a week before breaking up, the two top classes were taken by train to Stratford upon Avon (c. 1912). For weeks before the children had to make complete maps of Stratford upon Avon showing all the streets etc. in order that the pupils would not get lost. This work had to be shown to the Head before the tickets were given out. Sandwiches were taken for lunch and then for tea they went to a café in Wood Street, and this was followed by the treat of the day - a trip up the river on a steamer. After this they went home. This was the highlight of the year and the children worked hard to get into the top two standards in order to qualify for the trip."

Apart from the detailed logging of absences, inspections and educational matters, there are some striking features of the logbooks which merit a mention. In particular the issues of poverty, and the caretaking and cleaning stand out during this period.

2nd September 1896 A football-club was allowed to meet in the schools again last night. I have made repeated complaints to the Correspondent (church representative) about these unruly youths, as they have smashed several items of furniture.

9th September 1896 The caretaker (Miss Smith) complained to me that they removed one of the school-registers from my desk, and tore a part of it off to light their pipes with. It seems to be their chief amusement to destroy wantonly anything they can lay their hands on. (Further use was refused by the Vicar a few days later).

1st March 1900 I received a telegram from the Stock Exchange notifying Relief of Ladysmith. During the play-time I marched the elder scholars to the village and we all cheered for the Queen and her Soldiers.

25th November 1904 The coldness of the schoolrooms also causes the children much suffering. \the usual temperature in cold weather is 40° to 44°. In the Babies Room last week it was so cold that the thermometer (50° upwards) did not register.

1st May 1906 Mr Roads, Attendance Officer, has informed me to-day that he has been instructed to make a special effort to find all "wandering" children in this district and send them to this school - He says there are about 20 and practically all are illiterates - being children of navvies engaged on the New Railway (the North Warwickshire Line). The teacher of the bottom class (Std II) will have an arduous task.

12th December 1907 Very heavy rain in the morning. Some of the children, the first comers, very much wetter than they need be owing to the peculiar behaviour of the caretaker who allows no child inside the gates of the school playground until a teacher comes. The sad sight of a little undersized boy of seven sitting by the fire, bare-footed, while the teacher dried all that remained of his boots and stockings led two of his more fortunate class-mates to offer to bring from home what he needed. At afternoon school they derived much pleasure from dressing him in the coats and boots which they brought.

15th January 1908 The state of the playground beggars description. The Caretaker informs me that the "sweepings" of mud from the four rooms last night weighed 102 pounds - He also says that in fetching two hods of coal from the coalhouse he became "stuck in the mud". (The playground was finally asphalted in October 1909).

28th May 1908 Miss Gold writes to say that she is suffering from muscular pleurisy caused by standing in a draught also by standing too much - H.M.I. Barrington Ward called my attention a year ago to the fact that no chairs are provided for the teachers - If chairs were provided I don't see how the teachers could control their classes - The classes are too large and the furniture too cumbersome - One another man at least is necessary in this department. For thirteen years I have had to attend school even when ill as I am sure the work is beyond any woman of mature age leave alone young girls - There are 67 boys ranging from 10 to 14 years in my room.

11th February 1909 I left school at 11.45 to attend the Police Court. I took with me William Painting aged 13. It appears he took a tin of pineapple and a bottle of ginger ale from a shop yesterday dinner-time - He has been remanded to the work house for seven days.

15th January 1912 Mrs Morgan of Warwick Road Tyseley has informed me that her children are practically starving. Some time ago I brought the case to the notice of the Poor Law Authorities and the Chairman of Managers made investigations.

17th March 1913 Mr Chick visited the schools and offered 20 pairs of boots to the children in need of them - I have accepted his offer - Mr Chick is acting for the Acocks Green Bohemian Musical Society which does so much for the poor children at Christmas-tide.

23rd December 1914 At the close of the afternoon, Miss Walker of Fox Hollies Hall, Mrs Cordley Bradford and the Vicar visited the school and distributed buns, oranges and sweets among the infants.

19th January 1915 Whilst walking in the lanes this dinner-hour I met two of my boys - Carrick and Bell - wheeling a barrowful of coal - They informed me they had taken it from the school and were taking it to the Caretaker's house in Spring Lane - I have seen the Caretaker and she admits using the boys for this purpose.

Despite this and many other incidents, including one where she told all the pupils to go home to their mothers, Mrs Bones was not removed).

27th August 1915 Two loads of coal have been tipped down at the school gates. The man sent to get it in refuses to do it. It looks as though the coal will remain there all night, a dangerous menace to motorists etc. as it stretches half-way across the road. The boys of the top class and I have volunteered to wheel the coal in instead of taking the usual thirty minutes drill. Mr Bones, husband of the caretaker, came to the school at 4.15 and interfered with my arrangements as stated above. He was abusive and I ordered him off the premises. As he adopted a threatening attitude, seizing a shovel, I sent for the police and Mr Stewart School Manager.

22nd February 1916 Mrs Gunnell informs that there was a sudden explosion in her stove and that her eyebrows were singed off by the flames - this is due to the use of paraffin oil by the Caretaker when lighting the stoves…This woman does not realise the danger neither does she carry out one's instructions.

4th July 1916 Instead of play and nature lesson I am allowing a few boys in Std 4 to go to a neighbouring hayfield to have a lesson in haymaking and incidentally to help the farmer. I hope to-morrow evening to take some boys myself and help to carry the hay.

12th January 1917 I left school at 4.20 last evening - I returned again at 5.5pm. The Caretaker had finished her work and gone home - Unless the floors and furniture receive more attention there will be an outbreak of a loathsome nature among the scholars and teachers.

2nd March 1917 Fred Birch Std 4 has not been to school for 3 weeks - I have today communicated direct with the Education Authority, as I am told he is at work - He is 12 years old.

26th September 1922 (extract from Headmaster's report) The children come from a very scattered area; none live near. We are surrounded by large council schools, and our children consist largely of children whose parents prefer them to be "looked after" rather than "pushed on".

14th June 1923 The Prince of Wales passed by the schools this morning - The school staff marshalled the children who gave H.R.H. a fine reception - The Chairman of Managers, the Correspondent and the Treasurer were present - The school frontage was suitably decorated and the scholars provided themselves with flags.

15th April 1924 James Wootten fell in the playground and injured his leg so badly I had to send him home in a wheel-barrow.

22nd December 1924 The Christmas Tree for infants and Stds 1, 2 and 3 is being held this afternoon - This is the 29th occasion since I have been headmaster - Mrs Cordley Bradford and Miss Walker have been present at every function and acted as the fairy godmothers.

Henry Rose was a very conscientious man and the school logbooks show he was struggling against far too great a workload for many years. He died very suddenly in tragic circumstances in January 1927. Mabel continued to teach at the school until 29th February 1932. 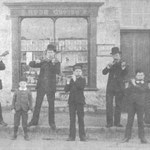 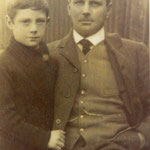 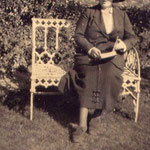 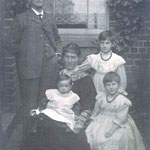 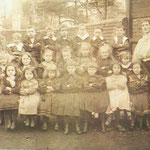 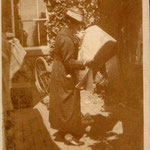