Today the name Fox Hollies estate refers to rather more then the land sold by Colonel Walker. It includes land sold by the Izods of Broom Hall and the Gospel Farm estate. Strictly speaking Walker land only went as far as the southern end of Fox Hollies Park and the area off Oakhurst Road.

The City had great ambitions for the Fox Hollies estate. It is based round curving roads, circles, and cul-de-sacs. They anticipated building over 3,000 houses on the 262 acres, and, interestingly, the original estate plan allowed for another smaller semicircle inside Pemberley Road opposite Hartfield Crescent to complete a circle. A 1928 report extols the virtues of the design considerations that were going into the construction of the 2,500 houses now planned. These were actually built between 1926 and 1931.

"The lay-out of the Fox Hollies Estate, however, really represents the high-water mark of achievement...by the City Surveyor's department. Here 2,500 houses are to be built, of three types - parlour, non-parlour, and a smaller class of non-parlour dwellings. An outstanding feature of the estate plan is the fine Greenwood Avenue, which is to be 140 feet wide from house fence to house fence, with an additional 20 feet of front garden on either side, to the building line. This thoroughfare has twin concrete roads with a broad centre space separating them, will be tree lined, and will give a long and beautiful vista, with a block of school buildings at the far end. This splendid avenue, with its ring-centre, forms the axis of the lay-out, with a splendid radiation of gracefully-curving roads. The pleasing and attractive prospect is enhanced by the variations in the house frontages, gables breaking the skyline at frequent intervals, tiles alternating with slate roof; these, together with stucco and brick combinations and other details representing at least 20 different designs.

The houses, too, inside are noteworthy as the very latest and best of the many types evolved by the City Surveyor and his staff. They embody quite a number of attractive features: excellently arranged and well-lighted rooms (including bath room), plenty of cupboard space, gas fires in the bed rooms, electric light throughout, and the hall and downstairs rooms covered with a pleasing choice of wallpaper. The smaller type of non-parlour house has been designed in the effort to bring down the rents to within the compass of the resources of small-wage earners. The accommodation is the same as the larger non-parlour type, including three bed rooms. The parlour type of house is let at 14s 11d., including rates; the larger non-parlour house at 11s 4d. inclusive; and the smaller no-parlour at 9s 4d. inclusive."

The report goes on to mention a visit to Olton Boulevard, formerly Greenwood Road. This was planned to be the new Birmingham to Warwick road: it never happened. Although Olton Boulevard East is a through route, it is still two sets of two-way traffic. It is an exaggeration to call Greenwood Avenue a thoroughfare, as it only goes between Shirley Road and Fox Hollies Road. However it is a dual carriageway! In fact it was built as a showpiece boulevard, as a different class of municipal estate route which tenants could aspire to live on, and which representatives from other cities could be brought to to admire Birmingham's house-building programme. Despite such justified pride, at the time the estate was being built, there was actually a policy of 'hiding' the new municipal houses from view on main roads. Thus Fox Hollies Road is lined with Dare's houses, and the municipal houses are behind.

Dennis Wilkes (interviewed in 2004)
John O'Rourke was my mother's second husband. He worked outdoors, and used to be on the dole in winter. He was a resourceful man, who knew animals. There were people moving in round here, and people moving out. He bought a horse and cart, a flat cart with four wheels, to carry their possessions. He earned money like that, jobbing. Colonel Walker had died, but the house was still there, and they were auctioning off the contents. The auctioneer was in the lodge house, which was opposite the top of Hartfield Crescent. His name was Gough. John O'Rourke used to rent the field between Greenwood Avenue and Fox Hollies Road, and graze his horse there. A lot of horses grazed on there: there were a lot of milkmen around here, at least half a dozen, they all used to pay a grazing right. The Dares houses were built there in 1933/4, and all the horses had to be moved. The estate was planned, with some council housing and some private. Dares got the contract for building along here as far as School Road. Crabbe had a contract to build houses on Olton Boulevard, they were more expensive and better built, better wood, for example. There's a bit of local rivalry there. Before Fox Hollies Road was widened, the trees met over the top all the way down to the top of the road. There were holly bushes underneath, and some of those stayed until after the war.

Greenwood Avenue and the new school at Hartfield Crescent, c. 1929. Note that Greenwood Avenue has not yet joined Fox Hollies Road. That only happened after the death of Colonel Walker, and the widening of Fox Hollies Road in 1931. This patch of land is where John O'Rourke grazed his horse. Thanks to Dennis Wilkes and Matt Redmond for the photo and help with the information. 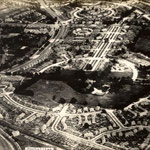 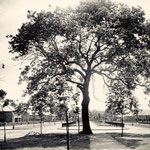 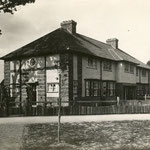 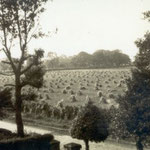 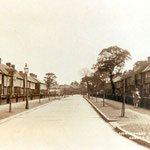 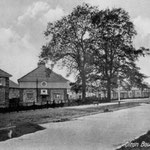 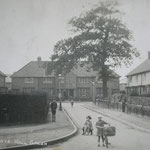 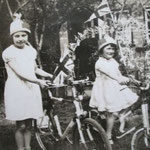 We went scrumping in the orchards for apples and pears. We crawled in the long grass to be hidden. When the house was demolished, Dad went over and had the toilet seat covers for our swing. There were two pools there (probably flooded basements/foundations. Ed.). We gave one lad a halfpenny to jump on planks to bring the newts up. We used to stop up late in the war, until ten, because we knew we would have to get up anyway because of the sirens. We played out in the street a lot: tipcat, rounders, Polly on the mop stick, hopping Jinny, and skipping. When it was frosty, we used to throw water down the middle of the Grove to make a slide, and we played on that for hours. You couldn't play like that now because of the cars in the road. We played hard and enjoyed ourselves. The Dryden Grove kids used to come round and raid us, throw stones. I moved there later.

The Fox Hollies pub, c. 1929. It opened in September 1928. The pub was designed by Wood and Kendrick to produce a country house look. In 1997 the Fox Hollies closed following objections by the police to what was going on there. In April 1998 the supermarket chain Lidl contracted to purchase the site subject to planning permission. This was granted on 1st April 1999, and a final agreement was signed with Bass Taverns at the end of the month. Demolition followed, and construction of the new supermarket began in the summer: it opened on 2 December 1999. While the pub had been empty, Bass had hired it out to the BBC to film a scene from a Dalziel and Pascoe episode: at 1.30 pm on 11 January 1999 a production manager standing in the garden was shot in the back of the head by someone with an air rifle. This person was on the top of a nearby building, and escaped the real policemen who came rushing to the scene. Fortunately the BBC employee was not seriously hurt. Lidl have retained William Bloye's Fox and Hollies bas-relief plaque from above the entrance to the pub in a wall of their supermarket. Our thanks to their Property Office in Birmingham for help with this information.

The provision of open space was an important consideration to planners, and Fox Hollies Park is an excellent example of the kind of provision made between the wars. Several years of draining, levelling and planting were required before it could be opened as a park. Fox Hollies Park is actually the most historic place in Acocks Green. Burnt mounds dating back to 1500 B.C. have been found along the stream course. These are said to be Bronze Age saunas. There was also a corn mill on the brook until the eighteenth century, and the round pool once belonged to Pool Farm. The area around the Hall was actually designated as open space as well, and the other half of the proposed ring opposite Hartfield Crescent was not built. This was a City decision: we have found no evidence that Colonel Walker was able to stipulate that the grounds should remain a park in his memory. Significant changes occurred after the war, of course. Road improvements were undertaken. Fox Hollies Road was widened, and so was Shirley Road, which was transformed in 1930-1 from a country lane with high hedges into a through route from Hall Green.

The Fox Hollies estate is an example of the quality housing that Birmingham built after World War One to enable slums to be knocked down and improve the health of its citizens. The Methodist church became involved in the welfare of the new arrivals in1927. The 'ladies' from the church visited one thousand 'women' from the new houses in order to recruit members for a Women's Cheerful Hour. Amazingly, the Cheerful Hour lasted until 1978. Part of the service involved the loan of a Maternity Bag to new mothers. This had to be returned clean after one month. St Mary's church opened a Hall opposite the end of Greenwood Avenue in 1936: Bishop Westcott Hall. This was one of a number of outlying buildings designed to attract people who would not walk to the church itself. Numbers dwindled after a while, and the building now houses Fox Hollies Forum. We have seen and heard accounts from many people of how delighted they were with their new homes. However, the municipal tenants were not welcomed by everyone. Shopkeepers would sometimes serve them only after they had served their regulars, and others said they were the sort of people who kept coal in the bath and burned fences in the firegrate. The reality is that the newcomers helped to create a very vibrant and economically successful Acocks Green, whose shopping centre grew and grew.

The origins of Fox Hollies

Fox Hollies since the war

The work of Dave Swingle

The work of Elsie Carter