After the war, around 1950, Arthur Huckfield recalls an alarming incident. He, Kath and their daughter were coming home one night and found a body lying on the pavement near their house. They were wary of intervening in case this was a trap, and so the two women went into the house and Arthur remained outside. He took a closer look at the body, and there was no movement, so he went to phone the police by the shops across Fox Hollies Road. While he was in the call box, two girls came round the corner, saw the body, and started screaming. They then ran to the phone box. While they were there, a car suddenly drew up, the body was bundled into the boot, and the car drove off down the road. As if this was not enough, the next Saturday Kath was horrified to see the same man walking up the road carrying a mattress on his back. It transpired that the man was a Lithuanian refugee, who had just been thrown out of a house down the road for being drunk, which of course is what he was the first time!

The main change since 1945 is that the clubs and nurseries, and some of the large houses, have been replaced by blocks of flats or small estates. Glyde Court, strictly speaking at the back of the land on Shirley Road, dates from 2002. Numbers 25 and 27, the first houses to be built on Hazelwood Road, were demolished for the left hand side of Aspen Close. The rest of Aspen Close and all of Sorrel Drive are on the site of Hazelwood Nurseries. This development took place in 1976/7.

The occupant of number 49 bought a piece of land at the end of his garden, which stretched along a few other gardens, and made an ornamental garden and croquet lawn there by the 1970s.


As we have seen, number 63 was replaced by a new number 63 and the pair 65 - 67, and numbers 69 - 71 and 71A were built at the same time as Green Acres, around 1970. This development replaced the Methodist Tennis and Bowling Club. Restrictions prevented the houses having more than two bedrooms, in order to restrict the number of occupants and thereby preserve the character of the road, but they were built in such a way that they could easily be converted into three bedroom houses, which has happened in some cases.

Number 11 Green Acres, built on part of the back garden of number 61, dates from around 1983. Numbers 15 and 21 date from around 1984, and numbers 17 and 19 from around 1985 were built on an enclosed piece of land behind the gardens of numbers 59 and 61. Number 11A was built over part of the garden of number 59 around 1997. The numbering of Green Acres went from 9 straight to 23, anticipating the ability to infill. On the evens side, no numbers 14 to 20 were allocated. The houses west of here dating from 2019 take up part of the former haulage and civil engineering yard at the rear of 230 Fox Hollies Road and much of the original gardens of numbers 75-79 Hazelwood Road. In 2008 seventeen houses were built on Keepers Way, a new road off Green Acres between Hazelwood and Westley Roads. Number 75 dates from around 1962. Plans were deposited on behalf of the owner of number 73. The house was designed with two large bedrooms. The semis numbers 103 - 5 were listed from 1953, although the application to build was dated 25th August 1950. The land used to belong to the Moodys of Clifton House.

Number 2 is a self-build dating from around 1992, and the new number 24 and numbers 38 - 42 appeared around 1965, when Hazeltree Croft was being built. The old houses at numbers 24 and 26, built by 1904, were demolished. This development replaced the Hazelwood Tennis and Bowling Club and Jones' nursery. The map below, from deeds loaned by Valerie Chadd, shows that numbers 24 and 26 formed part of the original parcel of land on which the tennis club existed. The square block at the bottom is a former orchard. The land was sold on 16th June 1922 by Henry Thomas Fellows to George Webb. The far end of Hazeltree Croft beyond numbers 52 and 54 was built on the nursery site.

Number 56 was replaced by Dogge Lane Croft around 1987, the name of one of the fields near Fox Hollies Road in 1847. This took place after prolonged legal problems over land ownership. The Willows, off Dogge Lane Croft, goes beyond two houses on Olton Boulevard East, which were built set back a long way from that road when it was Greenwood Road. The ends of gardens on Olton Boulevard East were sold off to enable this new development to take place, but one person refused and still has the extraordinarily long garden the house was built with. Numbers 92 and 94 Greenwood Road thus became numbers 1 and 3 The Willows in 1996, and the former access from Olton Boulevard East was closed off. The other new houses were then built. One house on Dogge Lane Croft had been built sideways on, which enabled a road to go through to the Willows. Number 58, Holly Bank, was replaced by Hazelwood Court around 1970. Numbers 60, 62 and 62A all replaced number 62 around 1980. Number 62 was formerly known as Hazel Glen (later The Glen). The grounds became garages for Coppice Drive. Number 70 dates from around 1954. Plans were approved in April 1953: two large bedrooms were built.

Clifton House at the Fox Hollies Road end of Hazelwood Road, was sold to the City at auction in June 1960 for £10,200, and the council flats had been built by late 1964. When the piles were being driven in to support the block, the ground heaved and the wall of number 104 was severely damaged and had to be repaired. Clifton House is listed as belonging to Olton Boulevard East, of course, but Clifton House is relevant to the history of Hazelwood Road nevertheless. When it contained older people only, life was more comfortable for the residents of Hazelwood Road, according to Arthur and Kath Huckfield. Two fields, one of which was Dogge Lane Croft, did not form part of the 1875 sale, and belonged to the original Clifton House. These were sold later, probably in the mid-1920s, and the Dogge Lane Croft of old has contained numbers 76 - 104 Hazelwood Road since the late 1920s.

Hazelwood Road is now more mixed in housing but less mixed in function, but remains a very pleasant road to walk down, and to live in. The number of people living there has trebled since the late 1950s, according to Doug Wilson of the Residents' Association. It is difficult to imagine that much more change could occur through further infilling, but experience shows that that is an unwise assumption!

In 2007 Hazelwood Road entered the Britain in Bloom Neighbourhood Awards, and produced the booklet below to promote their efforts. Fran Lee of the Residents Association won a Chevrolet Award for exceptional community achievement, and the road itself was one of only 10 out of the 52 entries in the whole of the Heart of England region to be assigned the category Outstanding within the Neighbourhood Awards Standard. One of the elements which impressed the judges was public art added to the road view at the Fox Hollies Road end. This had been made by a resident, Tony Vellam. When the award of Outstanding was achieved, he added a plaque to that effect at the bottom of the sculpture.

This is what Heart of England in Bloom said about Hazelwood Road:

This entry epitomises the whole ethos of RHS Neighbourhood Awards. A Residents Association formed and almost without exception everyone has got behind the campaign. the road and environs are a mix of private, rented and sheltered accommodation that have not only been brightened by 'bloom' but street furniture painter, public art and planters added etc. Sponsorship and help in kind is in abundance and it was a real pleasure to be invited to judge what appeared to be the cleanest road in Birmingham. Well done to all concerned.

And about Fran Lee's award:

Fran and a small team have totally transformed her immediate neighbourhood using 'bloom' to galvanise exceptional community spirit. A first time entry into the Neighbourhood Awards had all the hallmarks of efforts shown from long standing entries into the main campaign. Not only is Hazelwood Road surely the cleanest road in Acocks Green it also boasts public art, new hard landscaping, painted lampposts and post boxes but wonderful floral displays throughout.

Now the team has turned its attention to the library frontage and given it a lovely makeover in keeping with the dignity of the War Memorial there.

Since then, Fran has led a team with wider Bloom ambitions for the whole of the suburb, gaining better results year by year until achieving Gold in 2015. 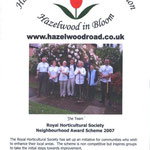 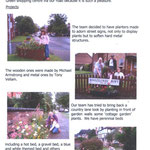 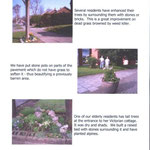 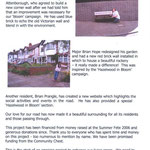 In 2008-9, a row of garages set back from the rear garages on Westley Road, stretching west from Acocks Green Christian Centre, was replaced by an attractive small development called Keepers Way by the developer, Cameron Homes. The houses are located on a new cul-de-sac, Ilsley Drive, which begins at 15 Green Acres. There is a single detached house, and several short rows make up the other dozen. This quiet and attractive addition is a distinct improvement over the vandalized garages that used to be there. On the opposite side of Green Acres, going through towards Fox Hollies Road, Hazelwood Gardens was completed in 2020, replacing a former commercial site.

In 2011 two more houses were added to the Willows. These stand on the former long garden belonging to Dorothy Jones, who lived for many years on Olton Boulevard East. She resisted selling her land to developers, but after her death the changeover took place, despite local opposition. The Willows, although a new road, has three old houses, which were built between Hazelwood Road and Greenwood Road (now Olton Boulevard East).

The one-time M.P. for Yardley, Secretary of State for Education and Minister for the Arts, Estelle Morris, since 2005 the life peer Baroness Morris of Yardley, lived in Hazelwood Road for a while. Also Mike Nangle lived here. He was Birmingham's first Irish-born Lord Mayor in 2005. He had considerable personal qualities, and is credited with a role in rehabilitating the Irish role in Birmingham public life. His face was added to the John F. Kennedy memorial in 2012-13, when it was re-installed in Digbeth. This caused some controversy at the time, with some saying the memorial should not have been altered. The original, in St. Chad's Circus underpass, was paid for by the Irish community, and dates from 1968.